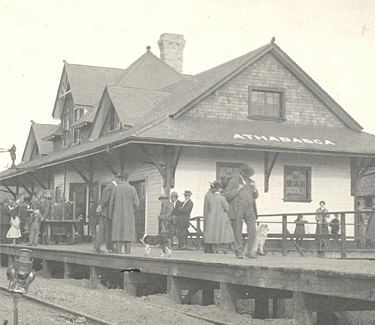 Between the years 1880 and 1914, Athabasca Landing, as the town was then called, became known as the "Gateway to the North," a jumping off point for the Peace and Athabasca trading rivers flowing to the Arctic. A meeting place of First Nations, Métis, and European traders, the Landing became the transportation hub for Hudson's Bay, Revillon Fréres, the Northern Transportation, and Peace River trading companies, and for independent traders Richard Secord, Hislop and Nagle, and Jim Cornwall. The Landing Trail linked Fort Edmonton to Athabasca and the Athabasca River, which became the major route for travelers, missionaries, surveyors, prospectors, and settlers moving into Alberta, the north-west and northern Canada.

Every spring, Athabasca Landing became one of Canada's largest inland boat-building centres as Hudson's Bay men, Orkney islanders, natives, and Métis constructed the scows and paddle-wheelers used to carry goods and people northward and to bring furs back south. In the late 1890s, Klondikers taking the poor man's overland route to the Yukon turned the Landing into a boomtown, building scows and waiting for spring break-up to set off northwards

The rich history of Athabasca Landing in the early 1900s also includes the settlers: from the United States, Britain, Eastern Europe, and a unique group of Oklahoma Blacks who farmed at Amber Valley, outside Athabasca.